“To be beautiful means to be yourself. You don’t need to be accepted by others. You need to accept yourself.” ~ Thich Nhat Hanh

We once may have taken on the world to manage,
trying hard but doing a miserable job. We could control nothing,
especially not ourselves. Miserable in the failure,
we turned to substances, behaviors, people, habits…crutches.
For a while they dulled the pain until they caused more pain
than we’d ever known before. Angry with every person in our lives,
we still tried to control them, needing their good will
so we could soak it up, so we could approach respect for ourselves.
We felt betrayed by everyone, that they had no worth
and we had less. We needed their respect,
their admiration so from that we could kindle
our own regard for ourselves.
Sometimes from the depths we are led to help,
begin to understand how wrong we’ve been,
surrender our role as director of the world,
find the truth we never could control anyone else,
nor even ourselves, but if we released the reins,
if we turned the whole mess over to a Power
capable of handling it all, if we did only the part we could
and gave up control of the rest, if we accepted who we were,
what we could do…if we accepted ourselves,
leave the rest to others, we find all we had tried to fix is fixed,
and we are okay…more than okay. We’re beautiful! 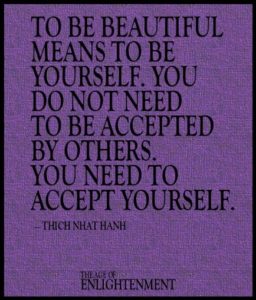